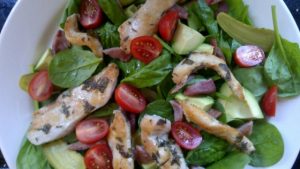 I can eat for two, right?

Umm…. not really, no.  Just because you’re pregnant, doesn’t give you the excuse to eat whatever you like, whenever you like.  I’ve known several clients who come to me for the first time after birth, having done zero exercise during pregnancy, not watched their diet and really, really paid for it by putting on 4+ stone.  It’s hard to shift, let me tell you, so in the whole grand scheme of things, pregnant women only need around 200 additional calories per day in the last trimester, so don’t take the blue line as an excuse to pig out.

Are nuts and cheese off the menu?

As for nuts, there’s no significant link between eating peanuts and your baby developing an allergy to them.  And, cheese?  Well, stick to the hard types whilst pregnant.  Unfortunately, brie, camembert and mould-ripened versions are off the menu.

Can Teflon harm my baby?

We all like a bit of scaremongering, don’t we?  Well, I’m here to tell you that you won’t have to go out and bin your pots and pans if they’re Teflon-coated.  According to the NHS, there is no credible evidence to suggest there’s any chemical risk or threat to you cooking with Teflon-coated pans whilst pregnant, so carry on with your stir fries, steaks and curries as normal. 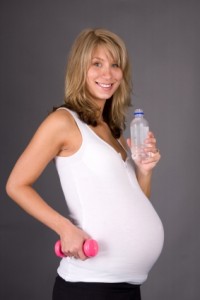 Should I avoid fish?

Seafood is actually a great source of nutrients, vitamins and minerals, so I’d say go for it.  I’d suggest eating at least 2 portions of oily fish a week (but possibly no more than this.  Shark, marlin and swordfish should perhaps be avoided, because of their high mercury content, but mums-to-be should make sure they’re getting adequate portions of oily fish in their diet too, just like the rest of the population.

Should I stop drinking coffee?

Well, yes and no.  According to some research, it’s suggested that pregnant women can consume up to 200mg of caffeine per day without putting themselves or their baby at risk.  A mug of instant coffee contains around 100mg and tea approximately 75mg of caffeine.  I personally, would suggest mums-to-be restrict the amount of caffeinated drinks they consume the moment they find out they’re pregnant.  Caffeine’s a stimulant, and if you’re struggling to sleep at night and really fighting fatigue during the day, drinking tea and coffee during the day really isn’t doing you any favours.

And, there you have it.  My no-frills approach to what to eat and what to avoid during pregnancy.  It’s a bit of a minefield, isn’t it?

What are your eating habits like at the moment?  Are you concerned you’re putting on weight?  Want to ensure you stay fit and active to combat excessive weight gain?  Then click here to find out the how.